Bill 41: Declaration on the Rights of Indigenous Peoples Act

As Indigenous organizations have noted, the Bill constitutes an important step towards the full implementation of the UN Declaration, and has the potential to transform the relationship between Indigenous Peoples and the Province from one of conflict to partnership, collaboration and respect. The Bill passed first reading, and will proceed through the next steps of the legislative process before it can be proclaimed into law.

Bill 41 represents one of the first concrete steps in Canada towards the meaningful implementation of the UN Declaration. The Act is intended to affirm the application of the Declaration to the laws of BC, contribute to the implementation of the Declaration, and support the development of relationships between the provincial government and “Indigenous governing bodies” (defined as entities that are authorized to act on behalf of Indigenous Peoples that hold rights recognized and affirmed by section 35 of the Constitution Act, 1982).

If passed into law, the Act will require the provincial government, in consultation and cooperation with Indigenous Peoples, to take all measures necessary to ensure that provincial laws are consistent with the Declaration. It will also provide a framework for provincial ministers to enter into agreements with Indigenous governing bodies for the joint exercise of statutory decision-making powers. This provision, along with the rest of the Act, has the potential to establish a new approach on the part of the Province which recognizes Indigenous Peoples’ laws and jurisdiction in respect of their ancestral lands.

The UN Declaration recognizes the inherent rights and freedoms of Indigenous Peoples and minimum standards which states are expected to meet in order to ensure those rights are protected. It was formally adopted by the General Assembly of the United Nations in 2007, following years of advocacy on the part of Indigenous Peoples throughout the world.

In Canada, the federal government refused to fully endorse the Declaration for almost 10 years following its adoption. Despite having finally committed to endorsing the Declaration “without qualification” in 2016, to date neither the federal nor provincial governments have successfully passed legislation which would bring domestic law in line with international standards. Instead, both levels of government have made repeated public commitments to pursuing reconciliation with Indigenous Peoples, while continuing to rely on legislation which is out of step with the principles enshrined in the Declaration. In BC and across Canada, the Crown frequently fails to adequately consult with Indigenous Peoples prior to making decisions which could adversely impact their rights.

First Nations families living on reserves face chronic discrimination in the provision of services, and Indigenous communities are left to grapple with the effects of megaprojects which have been authorized by federal and provincial governments without their consent.

After years of inaction, Bill 41 represents a real step towards the meaningful recognition and protection of the rights of Indigenous Peoples in BC.

Among the most significant aspects of the Bill is the establishment of a framework for shared decision-making between the Province and Indigenous governments. This provision will provide, for the first time, clear authority for provincial ministers to enter into arrangements with Indigenous governments for the sharing of power and authority over the management of Indigenous Peoples’ ancestral lands and resources. This is a positive and critical step towards the meaningful implementation of the principle of Free, Prior and Informed Consent in domestic law.

While the significance of consent-based decision-making cannot be overstated, there are also other, often overlooked aspects of the Bill. For example, Article 28 of the Declaration provides that Indigenous Peoples have a right of redress, by means that can include restitution or equitable compensation, for lands, territories or resources which have been taken, occupied or damaged without their consent. In a province largely devoid of treaties, the enactment of provincial legislation consistent with Article 28 could play a significant role in the resolution of disputes regarding the taking of Indigenous Peoples’ ancestral lands. 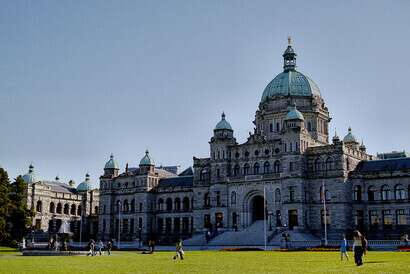 BC’s proposed legislation is expected to be the first of its kind to be passed into law in Canada, and is likely to set the stage for further legislative reform across the country. As such, it provides an important opportunity for governments to move away from hollow rhetoric regarding the importance of reconciliation and towards meaningful reforms which acknowledge the historic and current authority of Indigenous Peoples in relation to their rights and territories.

The Bill is clear that changes to provincial legislation must be undertaken in collaboration with Indigenous Peoples. The question of whether the Bill is successful in achieving its purpose will depend, in large part, on the extent to which the Province works cooperatively with Indigenous governments to develop revised legislation which reflects the spirit and intent of the Declaration.

Importantly, the implementation of the UN Declaration cannot be achieved through legislative reform alone. Bill 41 represents one step towards a renewed relationship between the Province and Indigenous Peoples. Ultimately, however, the principles enshrined in the Declaration can only be fully realized if the provincial government, along with non-Indigenous people residing in BC, are willing to commit to reimagining a new future in which Indigenous Peoples’ rights and decision-making authority are fully recognized and respected.

Kate Gunn, lawyer, is an associate at First Peoples Law Corporation. Kate recently completed her Master's of Law at the University of British Columbia. Her most recent academic essay, "Agreeing to Share: Treaty 3, History & the Courts," was published in the UBC Law Review last year.

Jesse Donovan is an associate at First Peoples Law Corporation.